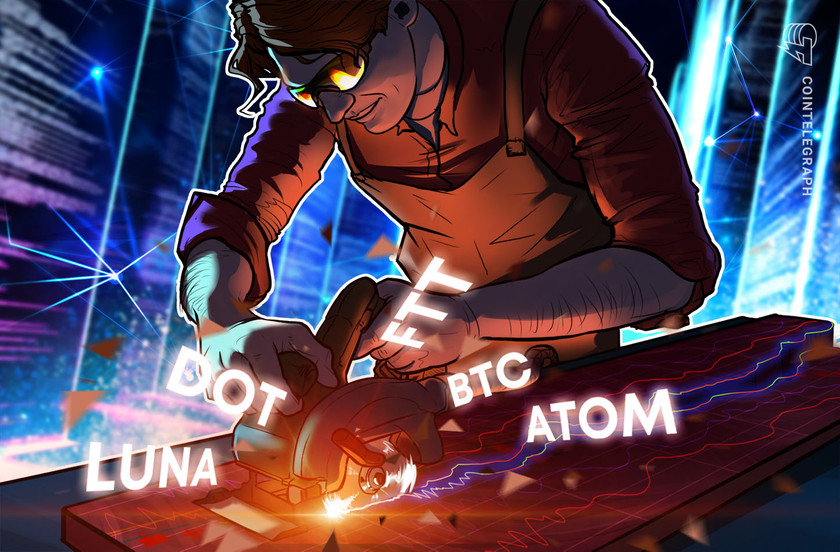 Bitcoin price is struggling to flip $48,000 to support, but the steady protocol developments taking place in DeFi projects could lead to further upside from DOT, LUNA, ATOM and FTT.

Bitcoin (BTC) and most major altcoins have been consolidating in the past few days as investors await a trigger to start the next directional move. Some believe that the rising inflation in the U.S. could prove to be bullish for Bitcoin.

In a note to clients, Anthony "Pomp" Pompliano said that the only way to protect oneself in the current environment is to invest either in “equities, real estate, crypto, etc.”

Bitcoin’s market dominance recovered from about 40.66% on Sept. 12 to 43.75% on Sept. 18, indicating that traders may be booking profits in altcoins and buying Bitcoin. The outcome of the two-day FOMC meeting next week could act as a trigger to determine the next directional move in Bitcoin.

Let’s study the charts of the top-5 cryptocurrencies that may outperform in the short term.

Bitcoin is witnessing a tough tussle between the bulls and the bears near the 20-day exponential moving average ($47,362). Although the price rebounded off this support on Sept. 18, the bulls could not sustain the higher levels.

The flat 20-day EMA and the relative strength index (RSI) near the midpoint suggest a balance between supply and demand. If bears pull the price below the 50-day simple moving average ($46,489), the BTC/USDT pair could slide to $44,000 and then to the breakout level at $42,451.67.

Crossing this zone may not be easy for the bulls because the bears will mount a stiff resistance. If the price turns down from this zone, the pair could remain range-bound for a few days. However, a break above the zone could clear the path for a possible rally to $60,000.

Although bulls pushed the pair above the overhead resistance at $48,557, the bears quickly pulled the price back below the level. This suggests that bears have not thrown in the towel yet.

The bulls are attempting to defend the 50-SMA. If they manage to push the price above the overhead resistance zone at $48,557 to $48,843.20, the pair could start its northward march toward $50,500 where the bears may again mount a stiff resistance.

This positive view will invalidate in the short term if the price turns down and breaks below the 50-SMA.

Polkadot (DOT) rebounded off the 20-day EMA ($32.39) on Sept. 18 but the bulls could not build up on the bounce. This suggests that bears are active at higher levels.

The rising moving averages suggest advantage to buyers but the negative divergence on the RSI indicates that the bullish momentum may be weakening. A break and close below the 20-day EMA could intensify the selling and pull the price down to the breakout level at $28.60.

This is an important level for the bulls to defend because the 50-day SMA ($27.07) is also placed just below it. If the price rebounds off this zone, the buyers will again try to resume the uptrend.

Conversely, a break and close below the 50-day SMA will signal a possible change in trend. The DOT/USDT pair could then drop to $22.66.

The 4-hour chart shows that the moving averages have completed a bearish crossover and the RSI is just below the midpoint. This suggests that bears have the upper hand. A break and close below $32 could attract further selling and result in a decline to $28.60.

On the other hand, if the price rises off the current level and breaks above the downtrend line, it will suggest that the correction could be over. The pair could then rise to $37 and later to $38.77. A break and close above this resistance will signal the resumption of the uptrend.

Terra protocol’s LUNA token is correcting in an uptrend. The bulls have held the 20-day EMA ($34.08) support for the past few days but they have not been able to achieve a strong rebound off it. This suggests that demand dries up at higher levels.

A break and close above the 20-day EMA will suggest that buyers are back in the game. The pair could then rally to $42 and then retest the all-time high at $45.01.

On the contrary, if the price breaks below the 50-day SMA, the correction could deepen to the critical support at $22.40.

The pair has formed a descending triangle pattern on the 4-hour chart. This setup will complete on a break and close below the support at $33.62. The pattern target of this setup is $22.23. The gradually downsloping 20-EMA and the RSI below 44 suggest that bears have the upper hand.

If the price rebounds off the $33.62 support, it will suggest that bulls are accumulating at lower levels. A break and close above the triangle will invalidate the bearish pattern. The bulls will then try to push the price to $40. This level may again act as stiff resistance but if buyers overcome the hurdle, the up-move may resume.

Cosmos (ATOM) broke above the stiff overhead resistance at $32.32 on Sept. 12. The bears tried to pull the price below the breakout level for the past few days but the bulls did not relent. This suggests strong demand at $32.32.

Both moving averages are sloping up and the RSI is in the overbought territory, indicating that buyers are in control. The long tail on today’s candlestick suggests that bulls flipped the $38.09 level into support.

The ATOM/USDT pair could now rally to the psychological mark at $50. Alternatively, if the price turns down from the current level and dips below $38.09, it will suggest profit-booking at higher levels. The pair could then drop to $32.32.

The 4-hour chart shows that the pair bounced off the 20-EMA, indicating that the sentiment remains positive and traders are buying on every minor dip. Both moving averages are sloping up and the RSI is in the positive zone, indicating advantage to buyers.

The bears are currently attempting to stall the rally at $44.15 but if bulls do not give up much ground, the possibility of the resumption of the uptrend is high. This positive view will invalidate in the short term if the pair slips below the 20-EMA.

FTX Token (FTT) is correcting in an uptrend and the bulls are attempting to defend the support zone between $63.13 and $59. Although the price rebounded off this zone on Sept. 18, the bears did not allow the price to sustain above the 20-day EMA ($64.64).

The 20-day EMA has started to turn down and the RSI has dipped into the negative zone, indicating that bears are attempting to make a comeback.

If bears sink the price below the support zone, the FTT/USDT pair could drop to the 50-day SMA ($54.73). A break and close below this support could signal the start of a deeper correction.

Conversely, if the price rises from the current levels or the 50-day SMA, it will suggest that traders are accumulating on dips. The bulls will then attempt to resume the uptrend. A break and close above $68.20 will be the first sign of strength. That will clear the path for a possible rally to $75.

Both moving averages are sloping down and the RSI is in the negative zone, indicating that bears have the upper hand. A break and close below $59 could intensify selling and pull the price down to $54.

This level had previously acted as a strong resistance and the bulls will now try to flip it into support. On the way up, a breakout and close above the downtrend line will be the first indication that sellers may be losing their grip.

The views and opinions expressed here are solely those of the author and do not necessarily reflect the views of Cointelegraph. Every investment and trading move involves risk, you should conduct your own research when making a decision.