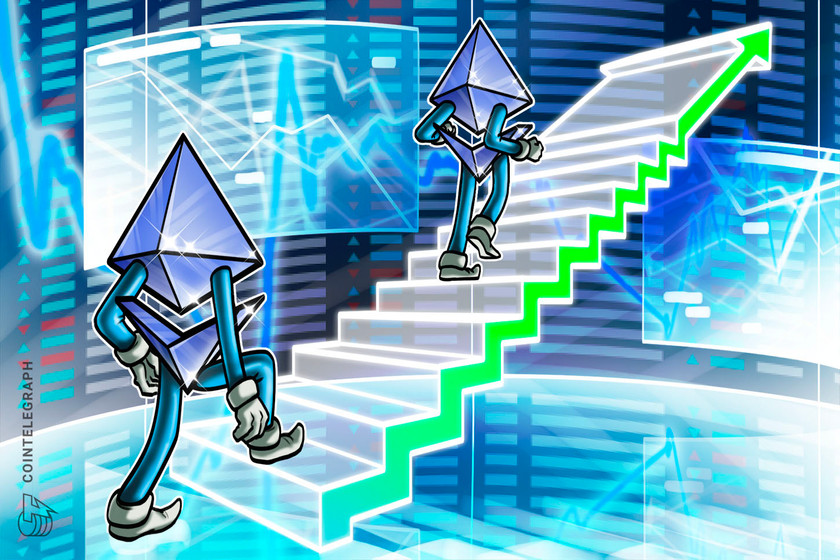 ETHW has logged a significant price rebound despite its blockchain network, ETHPoW, suffering a smart contract hack in the first week after its launch.

Fundamentally, this suggests that traders ignored the hack and trusted ETHPoW's long-term viability as a blockchain project.

But from a technical perspective, the ETHW price rally has accompanied weaker trading volumes. In other words, fewer traders have been involved in the pumping of the ETHPoW token's price in the past eight days, as the Bitfinex exchange data shows in the chart below.

The growing divergence between ETHW's rising prices and falling trading volumes suggests that traders' interest in the ETHPoW token has been dwindling. In other words, ETHW's price risks a sharp correction in the coming days.

This "bearish divergence" setup is supported by a descending trendline that has served as resistance for ETHW since Sept. 2.

On the four-hour chart below, traders have shown their likelihood of dumping their ETHW positions near the said resistance. Moreover, even the token's latest pullback move on Sept. 27 has originated near the same trendline, raising the possibility of an extended price correction.

As a result, ETHW's short-term technical bias is skewed toward the bears. So, if its correction extends, the PoW token risks falling into the $8–$9 price range, which also coincides with ascending trendline support, or a 25% drop from current price levels.

Still, a rising hash rate means more miners have joined the ETHPoW network after its split from the Ethereum proof-of-stake (PoS) chain on Sept. 15. In theory, it should ensure better protection against potential 51% attacks.

Simultaneously, ETHPoW has witnessed a growth in its network's total valued locked (TVL). As of Sept. 27, ETHPoW had 66,548 ETHW deposited across four decentralized exchanges functioning atop its blockchain compared to nearly 38,000 ETHW three days prior, or a 75% increase in the last three days.

Interestingly, UniWswap, a fork of the Ethereum blockchain-based decentralized exchange Uniswap, comprises more than 50% of the ETHPoW chain's TVL.

Other DApps include PoWSea, a nonfungible token ( marketplace, as well as exchanges PoWSwap and HipPoWSwap.