The GXS coin showed a sudden surge in its price where it gained more than 800% in just two trading days. This price jump was due to the revolutionary initiative the GXChain brought regarding its native token split combined with ecosystem incentives and EVM compatibility.

Why has the GXS coin price spiked?

GXChain is a fundamental blockchain for the global data economy, designed to create a trusted data web of value. However, to keep up with the advancing Defi, the GXC change itself initiated revolutionary change, including the brand, economic model, token distribution, and ecosystem cooperation according to the changes of the crypto generation.

Rebranding to R.E.I network; It has been announced that GXChain 2.0 will be renamed REI Network, where the R.E.I. is derived from the first three letters of three key features of the REI Network: Rapid, Economical, and Innovative.

Creating A Low-Cost, High-Speed, EVM- Compatible Blockchain; Compared to GXChain 1.0, REI Network has wholly restructured from the underlying architecture to a much simpler blockchain structure. The new blockchain is compatible with EVM and Ethereum RPC, enabling more applications developed on both platforms, including DeFi, to be more quickly and directly connected.

Through staking, users can obtain free on-chain transfers and calling contracts, as well as other resources such as trading fees. The REI Network can thus meet the requirements of compatible EVM while simultaneously addressing the issues of high processing costs and slow speed.

Token Splitting; The conversion of the native tokens of the main network from GXC to REI will be based on a 1:10 split rule, and 10 billion REI will be issued at a time.

Distribution Method after the split; As a result of the split, there will be 1 billion tokens, and the tokens held by the GXChain Foundation will be reduced from 25% to 0%. The particular distribution is as follows:

GXChain has proposed a radical ecological cooperation incentive method, wishing to use all 250 million REI unlocked to motivate ecological contributors and developers in the REI Network. Some of the methods include but are not limited to rewarding outstanding developers, investing in high-quality projects, rewarding users for making significant contributions to the environment, etc.

An initiative of the On-chain Community Governance; REI Network will also integrate a new on-chain governance module, where each coin holder will be able to vote on on-chain changes, with one coin per vote, and the detailed governance rules can be found here. 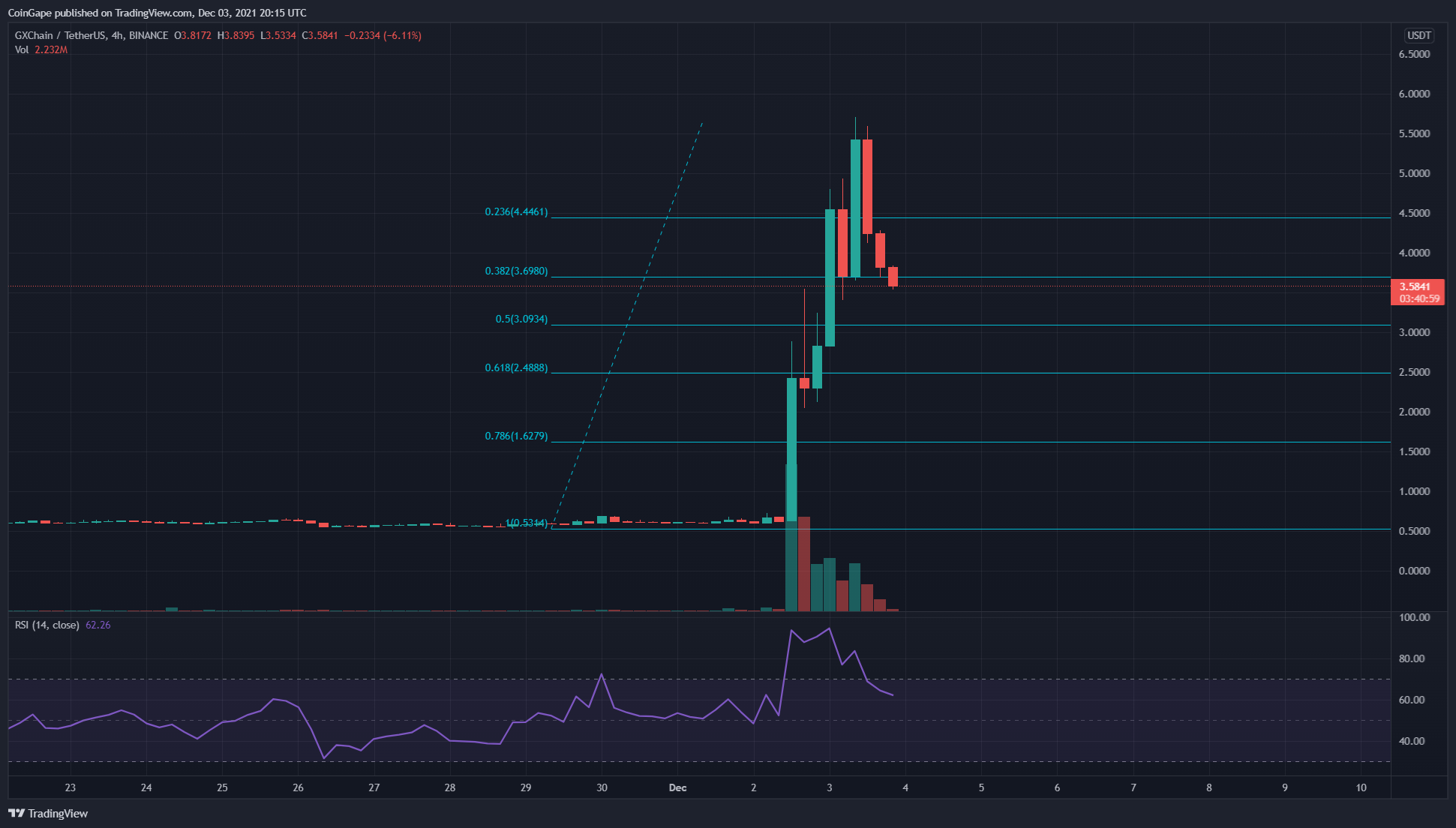 Ever since the sudden fall of May and June, the GXS coin had never closed a daily candle above the $ 1 mark. For more than five months, the has been wavering in a tight range, fluctuating within the $0.88 and 0.39.

However, the news mentioned above caught the interest of several crypto investors, which resulted in an 800% price surge in just two trading days. Today, the coin made a high of $5.8 mark, and after obtaining a sufficient resistance from this level price initiated a retracement phase,

The coin is plunged to the 0.382 Fibonacci retracement level right now, trying to sustain above this level. However, if the price continues to move lower, the crypto traders can expect the nearest support at $3.1(0.5), followed by the 2.5(0.618 in FIB).