Toncoin (TON/USD) trades at $1.97. The level is an important resistance zone; it is the third time the cryptocurrency has tested it since September. TONCOIN was trading with increasing momentum at the crucial level, implying that buyers were looking for a potential breakout. Will it happen?

Toncoin is a decentralised blockchain and a Layer-1 protocol. The project was founded in 2018 by Telegram before being abandoned. The acquisition by the TON Foundation saw its name change from “Telegram Open Network” to “The Open Network” or simply, TON.

TON is a community-driven protocol. It features a flexible architecture with a focus on the typical customer. The blockchain’s mission is to have a robust ecosystem for decentralised services, storage, instant payment, and a domain name system. It is regarded as one of the fastest blockchains. In September 2021, at the height of the crypto boom, Ton processed a then-world record 55,000 transactions per second in a contest. The TPS has since grown rapidly in line with improving technology.

TONCOIN, the native token, has, however, succumbed to the bear market. The token topped $4.8 in December 2021. It now trades at less than half the value, although the price is still sound compared to most cryptocurrencies. TONCOIN is now giving bulls an alert ahead of its next move. 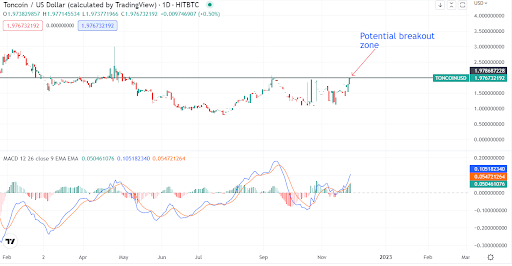 Technically, TONCOIN is trading with bullish and improving momentum. The MACD indicator is bullish as the cryptocurrency retests the $1.97 resistance. A break above the resistance would allow TONCOIN bulls to push the price to the next possible resistance at $2.8.

What to do next for TONCOIN?

Wait for a confirmation of a breakout at $1.97 before buying TONCOIN. With the cryptocurrency getting rejected at the crucial level three times, investors should also be prepared for a correction. A rejection of the upside will pit TONCOIN back to $1.

Where to buy TONCOIN

The post Toncoin is on the verge of a breakout. Here is the next potential target for bulls appeared first on CoinJournal.